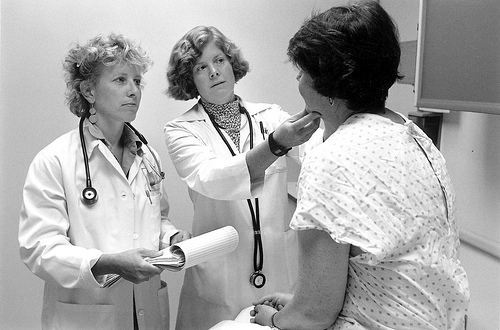 How to Handle the Doctor’s Appointment

They aren’t nice, are they?

Doctor’s waiting rooms, I mean. You’re sitting there waiting to be called, surrounded by posters and leaflets for various diseases

(What, yellow fever? Do I have that? Huh, well I suppose that tooth ache could be cancer – argh!).

Flanked by people hacking and coughing, or staring at you as they aren’t interested in out of date magazines.

(Or perhaps that’s just me. But if I don’t like people staring I can choose to dress down or minimise myself or tell them to stop. But I like red shoes, and wearing fabric roses in my hair and heels that, used offensively, could make a man weep, so I will continue to wear them.)

In the hospital, it can feel like fear is wandering the halls like a poltergeist. One minute you are feeling fine and the next you are seized by terror and caught up in planning your funeral arrangements.

However, we’ve come up with a list of tips which will help make your doctor’s appointment effective and as easy as possible.

:: It can help to take a short list of your main points to help you remember because it’s so easy to forget what you wanted to say once you get into the surgery.

:: Whatever you do, don’t take in a huge list of points on a notepad or similar. Can you imagine if you had the energy for a quick phone call and someone turned up with a huge list of things to discuss? You would be put off and start to tune out immediately. Just take your 3 or less points and write them on a postcard or index card so the doctor can see you aren’t planning to keep them there forever.

:: If you brought along your friend/ parent/ someone to support you, you could always put them to good use and get them to speak for you if it’s easier.

:: You may take notes in the appointment, but keep a separate section of your list and out an action-points list there. Otherwise you might be too exhausted after the appointment to pick through all your notes and miss following up on things you needed to.

:: Remember – Wikipedia is not The Lancet, and doctors will not treat it as such. They want to work with you but would rather you didn’t try to do their job for them. I’ve known people to basically print off Wikipedia and then go crazy with the high lighters. Handing your doctor something you tore out of a magazine or that you printed off the internet will probably not endear them to you. After all, why did they bother going to medical school if you can get the same knowledge from Google? Instead, raise concerns gently – “I’ve been wondering if we could rule out/look into ____”. It will be easier for everyone – really.

:: The doctor will probably ask you questions about what you’re telling them. Be honest. It’s too tempting to tell them that you get regular exercise, drink two litres of water a day and that you smoke / drink less than you really do. Or you might feel embarrassed telling them about bowel problems or unwanted facial hair, but giving the doctor the right information will give them a much clearer picture. A detective can’t solve a mystery without all the clues.

:: Don’t expect an answer then and there. It might be a long time. This is not the doctors fault, and they are doing their best. Medicine is not simple and blood tests are not crystal balls. Together we can get where we need to go.

:: Listen to your intuition – if you feel something strongly then you need to tune in and explore it. The problem is, how do we tell the difference between intuition and fear? It’s not always easy and it’s different for us all. For me, I know that intuition persists no matter how I feel but fear only comes up when I am sad or vulnerable.

:: Whatever we’ve done in the past is staying there. We acted in the best way we could at the time. Judging ourselves does not help us heal now. Take something to distract you while you are waiting for the appointment – iPod, magazine, Podcast, a good book. Remember that right now you are getting help, this isn’t the time to overhaul your entire life and never never drink or be bad again. Small steps sweetheart, and you are in the right place already.

:: It might seem bleak now but there is a way through this, even if it is just to keep breathing. When you don’t know what to do just keep moving.

:: You can get the information you need from the doctor and go where you want from there. You are in charge of your treatment choices. Go in, get the facts and come away to think things through.

Remember – we are healing and trail blazing together.